Since its construction in the 15th century, Selly Manor has served as a focal point for a number of local artists and photographers. As a result, the museum now houses numerous paintings, drawings and photographs of the building ranging across the centuries; charting it’s fascinating past through a variety of creative lenses. This post marks the start of a series, in which a charming selection of these pieces will be uncovered and displayed online to the public for the first time.

Item one: ‘Sally Hill near Birmingham’

In the service of tradition, the first piece we have chosen to display is the earliest depiction of the manor currently housed in our collection. ‘Sally Hill near Birmingham’ is a watercolour print by J. Sutherland produced in 1809. Unlike the majority of paintings we have, this piece depicts the manor in its original location, Bournbrook Road, prior to its deterioration. 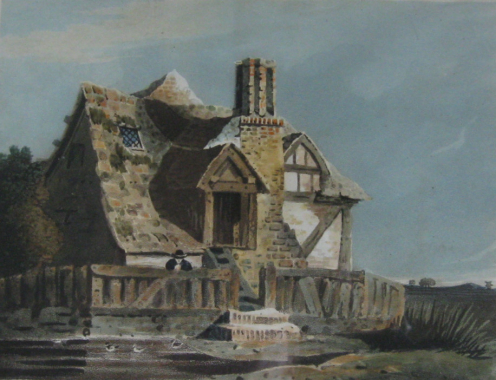 At this point in the building’s history, it was divided into two separate properties and its former status as a prosperous farm house was beginning to decline. As the name would suggest (‘near Birmingham’), we can surmise that the Selly Oak area, in which the manor was originally built, had not yet been impacted by the rapid industrialisation taking place in the near-by city. Although construction of the Birmingham-Worcester Canal would have been ongoing in the area, it is likely that the surrounding pastures and farmland depicted in the painting would have remained untouched at this time.

Sutherland’s portrayal of the manor is not only striking for its aqua tones and picturesque surroundings, it also offers various points of interest for historians of the manor. The exterior staircase depicted, for example, is key to understanding the development of the building’s architecture through time. As shown by Sutherland, the staircase appears to have consisted of an exterior ladder structure, leading into the first floor of the building. Although this seems to be an unremarkable detail of architecture, later images of the manor show that this staircase eventually disappeared. It is likely that the stairs declined with the rest of the house towards the end of the 19th century. It is only when George Cadbury acquired and moved Selly Manor to Bournville in the early 20th century that we see evidence of the stairs being re-introduced to the structure. We can subsequently assume that the principal architect involved in the manor’s move to Bournville, W. A. Harvey, studied earlier depictions of the manor, similar to ‘Sally Hill near Birmingham’, in his reconstruction of the building.

Little is known about the artist of ‘Sally Hill near Birmingham’. We can speculate that, like many who painted the manor, Sutherland may have been a local amateur. The unusual nature of this piece, however, is that it was published and re-produced for the general public. This was common in the early nineteenth century, as landscape paintings were beginning to develop as popular additions to middle class British homes. There was an increased desire for nostalgic, homely scenes to combat the increased industrialisation of the nation. The picturesque nature of ‘Sally Hill near Birmingham’ and the inclusion of features such as a duck pond and distant mill may, therefore, have been added by the artist to meet the increasing demands of the general public.

Whether produced to please the public or to realise a local artist’s vision, ‘Sally Hill near Birminigham’ is a fascinating piece of art and a valuable addition to the Selly Manor collection.